Skip to content
April 6, 2020, #CARBONARADAY: A live streaming on social media to get closer chefs, bloggers and foodies celebrate the “Home Made” version of this pop dish 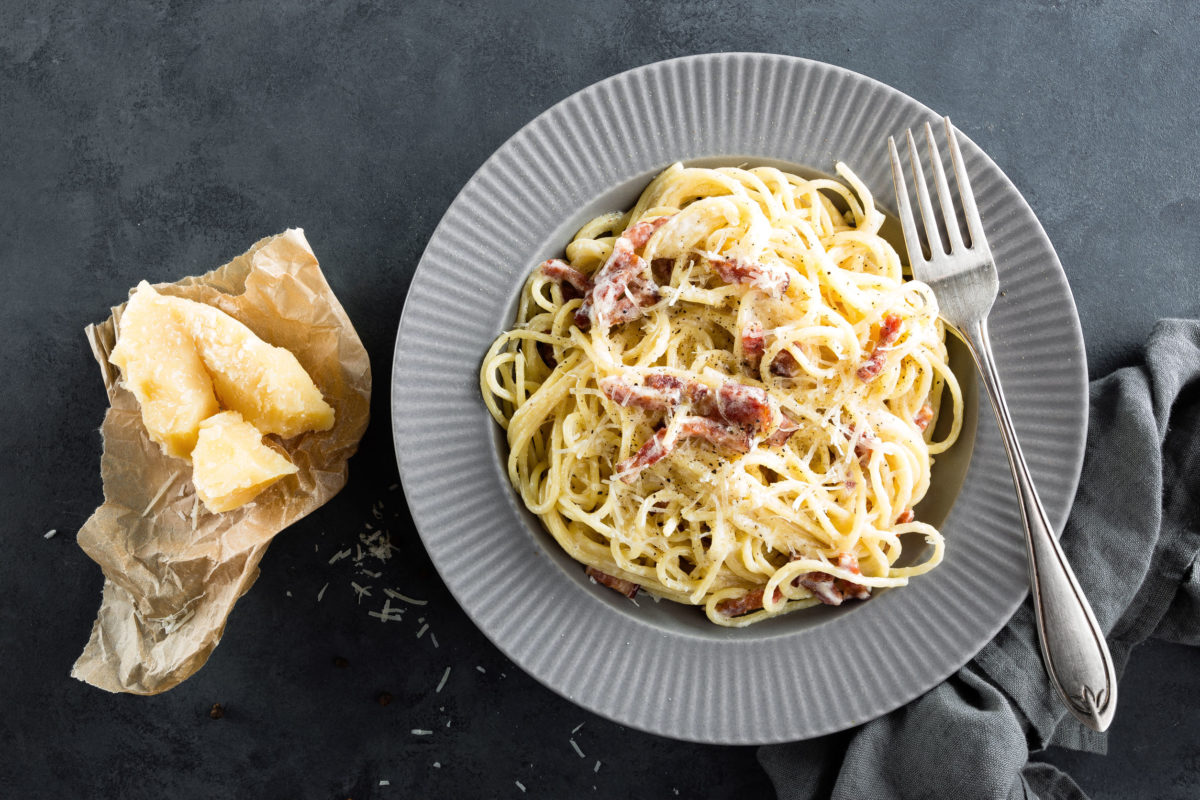 #CarbonaraDay will be back on the 6th of April and this year the virtual spaghetti party – which reached a potential public of about 500 million people last year – will be even more meaningful. Indeed, forced isolation does not prevent people from keeping in touch and getting closer with the available means. Therefore, among flash mobs at the window, concerts on the balcony and grapevines spreading through chats, the pleasure of sharing on social media and gifting ourselves with a dish of Carbonara, the warmest and most joyful side of pasta, can also be a symbol of resilience and cohesion.

“Talking about Carbonara means something new this year – as Riccardo Felicetti, President of Unione Italiana Food Italian pasta makers, explains. “In a moment when we are forced to keep sociality and conviviality distant, #CarbonaraDay becomes an act of resistance and optimism. Preparing and sharing photos or videos of a pasta dish is a way to feel close and united again by means of a recipe that represents pleasure, consolation and happiness. We invited chefs and pasta lovers to share their #CarbonaraHomeMade version online, while waiting for a no longer virtual pasta party.”

There are all good prospects for this event to succeed: Carbonara is the most loved and shared pasta dish in the world and people never get bored of taking pictures and discussing about it online: there are more than 1 million contents on Instagram with #Carbonara hashtag, while flames and memes about Gordon Ramsay’s carbonara still animate social media.

The fourth edition of #CarbonaraDay, an event created by the Italian pasta makers belonging to Unione Italiana Food and IPO – International Pasta Organisation will start on Monday, April 6 at 10 am (CET). The rules are simple: just follow #CarbonaraDay and #CarbonaraHomeMade hashtags to participate in the virtual event with bloggers, food influencers, journalists and chefs and try to stream live and share opinions, photos and some advice about this dish on Instagram, Facebook and Twitter, all under the banner of entertainment and inclusion, even if from our home.

CLASSIC, SEAFOOD OR LIGHTENED: THE “CARBONARA MASTERS” WILL COOK IT AT HOME

Carbonara brings people together. Over the years, it became gourmet, loved by foodies and Millennials and among the best sellers in food delivery. Classic or revisited, it becomes veg or healthy in just a few steps and with a few tricks, by adding ingredients like fish or by using cooking techniques to lower the amount of fats that can be easily repeated at home.

This year marks the tenth anniversary since the Mediterranean Diet was declared UNESCO World Heritage, so the main aim is to answer a question: if this dish can be considered as a typical dish of this diet (or, even better, lifestyle) and how it can reinterpret or reinvent that tradition nowadays.

FROM K-RATION TO MEDITERRANEAN DIET: THE CLIMB OF A PEASANT DISH

Some food for thought about Carbonara and Mediterranean Diet comes from the history of this dish. The origin of Carbonara is a mystery. An aura that maybe generated that flow of interpretations that made it the pop dish par excellence. According to some, its ingredients have a peasant or “transhumant” (and thus Mediterranean) origin: dried pasta, eggs, jowl bacon, pepper and pecorino cheese, which can all be easily found, moved and stored.

A leading thesis states that the fact that it was included in cookbooks after WWII is a sign that the Americans invented Carbonara. More precisely, in 1944 allied soldiers knew pasta and, as they went northwards in Italy, they mixed spaghetti with their ration of egg yolk and bacon to eat the right amount of energy in only one practical and quick dish. The person who invented the so-called “K-Ration” was Ancel Keys, the same who later “discovered” and defined the Mediterranean Diet in Cilento region.

CARBONARA DURING QUARANTINE? IT HELPS TO LOVE OURSELVES (AND TO SLEEP AT NIGHT)

In these days when we are forced to spend a long time at home, loving ourselves through food can give us a sense of happiness, provided that we follow a correct and Mediterranean diet and we don’t exceed our standards in terms of meals and portions and provided that we train, even if at home. According to Luca Piretta, gastroenterologist and nutritionist at Campus Biomedico University in Rome, “Whatever pasta-based dish can be included in a Mediterranean balanced diet, Carbonara too. In this recipe, pasta provides slow-release carbs, thus healthy energy and vegetable proteins, while animal proteins can be found in jowl bacon and in egg yolk, which also contains some vitamins like carotenoids (Vitamin A precursors) and Vitamin B, also present in cereals and jowl bacon”. What about fats? “They shouldn’t be demonized – as Dr. Piretta explains – but they should be 25-30% of the daily calories intake. Things are different when it comes to those who suffer from certain pathologies or high cholesterol levels”.

What if in these days we want to eat Carbonara for dinner while watching our favorite TV series, alone or with our family? According to Dr. Piretta “There is no downside, rather the contrary. The tryptophan in carbohydrates is a precursor of sleep and wellness hormones, i.e. melatonin and serotonin. Being rich in carbohydrates, pasta stimulates the production of insulin which in turn facilitates the absorption of tryptophan. The amount of jowl bacon in a portion is so low that it does not interfere with sleep. Dinner is usually a simple meal; thus, the suggestion is certainly to eat Carbonara as a single course”.

SHARE ON
carbonaraday / events / news
RELATED NEWS
eventsnewsworld pasta day
Pasta, that’s how we will eat you in 2050

The chefs and pasta lovers who will take part in the first edition of “Al Dente” (http://aldente.worldpastaday.org), have been inspired by the following 6 main trends that will mark pasta … END_OF_DOCUMENT_TOKEN_TO_BE_REPLACED

The American Smoky Tomato Carbonara has divided the web but united Italians: according to a survey by the Unione Italiana Food on a sample of almost 4,000 people, for 95% … END_OF_DOCUMENT_TOKEN_TO_BE_REPLACED

2020 has been sadly marked by the health emergency, but the global love for pasta hasn’t stopped. On the contrary, an international study reveals that 1 person out of 4 … END_OF_DOCUMENT_TOKEN_TO_BE_REPLACED