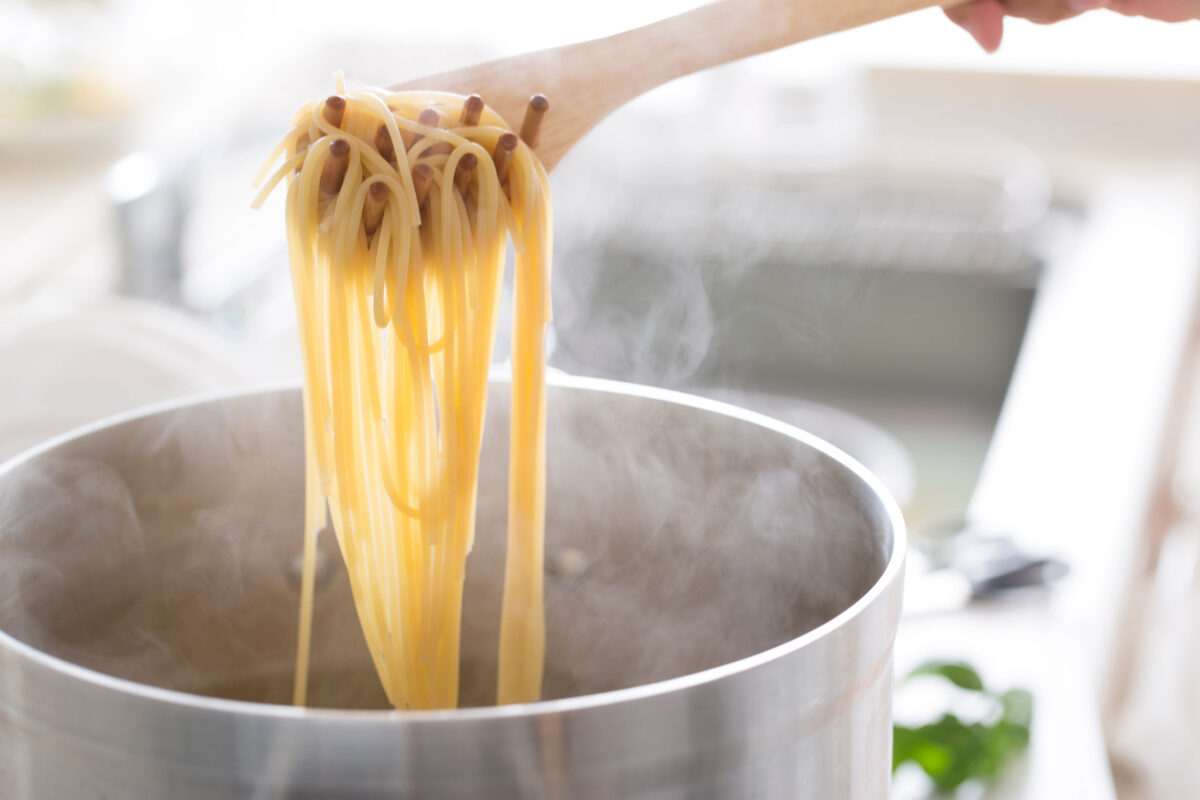 There is no single way to cook pasta, but there is an evolution in history and a geographical marker. Today, cooking pasta al dente means cooking it in many different ways: from pressure cooker cooking, to passive cooking (you throw the pasta into the boiling water, boil it for a few minutes, turn off the heat, cover and let the pasta stay in the water) vs. infusion cooking, to express cooking to “risottata” cooking to double cooking. The best? That depends…

DOUBLE COOKING – A restaurant and canteen classic, great for anyone with a large family or for when our dinner parties will be less… socially distant. Two or three hours before service, the pasta is cooked for half the indicated time, it should then be drained into a tray with a drizzle of olive oil and cooled immediately (better if in a blast chiller). The pasta is then covered and kept in the fridge. When you want it, place the pasta in boiling water for 30-60 seconds and serve.

ONE POT PASTA – A variation of risotto-style pasta, loved by Michelle Obama, ecologists and… lazy cooks, because using a single pot for cooking the pasta and its condiments saves on gas, electricity and washing up. Start with cold water (1.5 litres of water per 200g of pasta), adding the other ingredients one by one, then, once it reaches the boil, the pasta can be added. When all the water has evaporated, the pasta is ready to serve.

“A CAMPANA” COOKING – The challenge with cold pasta dishes is to stop the cooking at the right point to avoid an overcooked “mishmash”. Biggest error: cooling it by rinsing it under water or leaving it to overcook in the pot. The solution: the “a campana” (bell) method. At two thirds of the cooking time (if the cooking time indicated on the packaging is 14 minutes, it should be boiled for about 10 minutes), the pasta should be drained well, transferred to a salad bowl and sealed with cling film. The film will swell creating a “bell-shape” and the cooking will be completed dry. This way, the pasta will remain intact, tasty and “al dente”, even the following day. Important tip: this method is best for small and short pasta types.

BAKED PASTA – Dry pasta should always be pre-cooked, usually “al dente”, but with some exceptions: if the sauce is rich and liquidy, it should be cooked for 2/3 of the time. The pasta should be placed in a pre-heated oven, to avoid it overcooking while waiting for the crust to form on top. If, however, the choice is a fresh or egg pasta, or certain types of lasagna, there is no need to pre-cook as the natural humidity of the other ingredients will preserve the pasta’s softness even post-cooking. The ideal temperature to create a crispy crust varies according to the recipe and pasta type: for example, cannelloni should be cooked at a high temperature, even above 220°C, while a lasagna has best results at 180-200°C maximum. A fun fact: baked pasta is better the next day because the oven dries it from most of its cooking water, so the pasta “captures” the starch gelatinisation and pasta consistency, especially on the surface, keeping it similar to “al dente” for hours or even days.

A healthy lifestyle includes a healthy diet, with an adequate presence of carbohydrates and fiber, based on the Mediterranean diet model but also on regular physical activity. The indications that … END_OF_DOCUMENT_TOKEN_TO_BE_REPLACED

pasta
LASAGNA: THE MOST-LOVED PASTA DISH THAT BRINGS PEOPLE TOGETHER

No other pasta recipe is capable of expressing conviviality, warmth and love like lasagna. Yet, passion for this dish is widespread across Italy and the rest of the world. An … END_OF_DOCUMENT_TOKEN_TO_BE_REPLACED

eventspastaworld pasta day
The Truth About Pasta: It’s Good For You & The Environment